The sound of Celtic music is brilliantly fused with dynamic modern rock music by WOLFSTONE. This is Celtic Rock at its best - the fusion of the power and sonic spectactle of Rock with the energy and spirit of the Celts is unmissable. The great album, The Year of the Dog (1994) (Green Linnet GLCD 1145), for example, packs a real punch from start to finish. The Double Rise Set is a fantastic dance track, brilliantly combining the sound of Rock Music with the Highland Pipes, the latter taking the lead. The traditional Braes of Sutherland is given a glorious, heartfelt performance here and the Pipes make a searing entrance later in the piece.

The recent follow-up The Half Tail (1996) (Green Linnet GLCD 1172) is, if anything, an even more powerful release. All of the first six tracks are excellent: such consistency of quality is rare from any musicians. Indeed, on the whole CD, only track 7 Glenglass, a rather tame slow air, is somewhat weak. Otherwise, this is Celtic-rock at its very best. The opening Zeto begins mysteriously before the arrival of the bagpipes in movingly passionate form and then a full, lively display, sounding very Celtic. Once again, the songs, such as Tall Ships and Heart and Soul are extremely well written, very memorable. The slow air Gillies, with its Bagpipe opening is also moving and well played. In short, this CD is an essential item!

Visit Wolfstone on the Internet.

The Tannahill Weavers are another excellent traditional music band, in a similar vein to Ossian, with a host of quality recordings behind them. Sampling their most recent release, Leaving St. Kilda (1997) (Green Linnet GLCD 1176) is probably as good a place to start as any. The work contains a number of songs and instrumental sets, with bagpipes being quite prominent (and excellently played). I find this an all-round quality album which I have kept wanting to return to. Songs such as The Rigs o' Rye and Fareweel you Silver Darlin's are uplifting, memorable and sonic delights. Above all, the title track is a very moving and haunting slow ballad, led by the pipes, with flute and strings background: an excellent testimony to Scottish-Celtic spirituality.

A similar mood is also present in the track Heather Island which can be sampled on The Best of the Tannahill Weavers 1979-1989 (Green Linnet GLCD 1100), along with a collection of other earlier Tannahill Weavers classics, again featuring excellent bagpipe playing. My only reservation here is that the sound quality of this release is rather poor, having been taken from analogue originals.

One of the greatest traditional Scottish bands are certainly OSSIAN. Led by all-round masters, Billy and George Jackson, they are clearly very skilled musicians and thoughtful arrangers of traditional material. Ossian have several recordings to their name and the compilation CD The Best of Ossian (1994) (Iona IRCD 023) has become one of my favourite Folk CDs of all. Harps, Uilleann Pipes, Whistles, Citterns, Mandolins, Fiddles, Flutes, Guitars, Dulcimers, Vocals and of course the great Highland Bagpipes are all to be heard in the various pieces, brilliantly combined as appropriate. 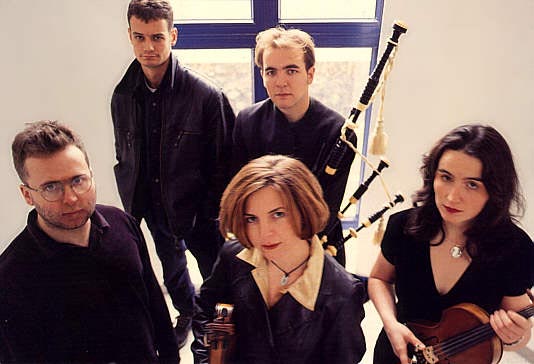 Deaf Shepherd are one of the brightest prospects in the current Scottish music scene. Their recent release, Synergy (1997) (Greentrax CDTRAX 143), is a superb showcase for their talents, which are considerable. Musically, they follow closely in the footsteps of the great Tannahill Weavers, being a five-piece traditional music band, boasting a spectacular double bagpipe sound to add to the fiddles, guitar, whistles and bouzouki. And there's no doubt, they can really play! The album has sufficient variety to attract a wider audience and is melodically above-average with eminently memorable pieces. The very opening sequence, the first couple of minutes of the album, is pure Scottish heaven: a gentle bouncy rhythm, sensitively orchestrated with real Scottish spirituality (note the decorative lilts of both fiddle and whistle), staying in the mind long after. The Tannahill influence is clear. One of my records of the year, Scottish quintets don't come much better than this.